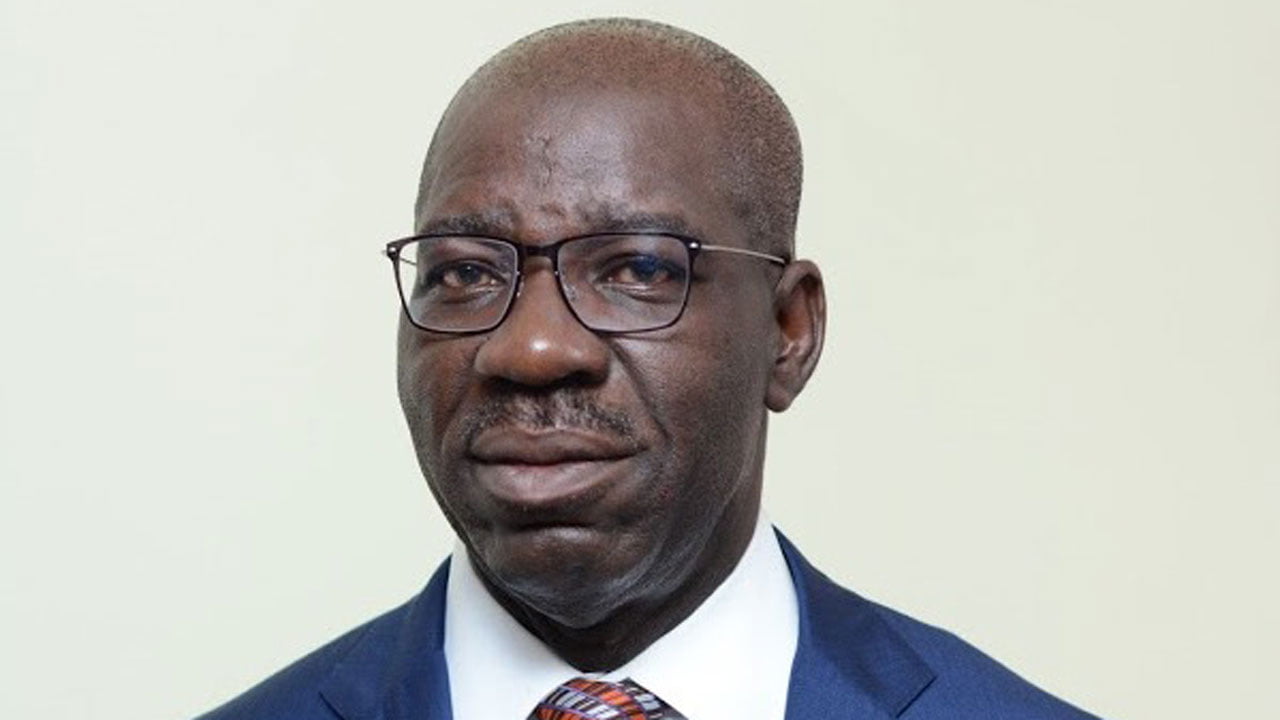 who is currently serving as the Executive Governor of Edo State. He was sworn in as the governor on 12 November 2016.He was the Chairman of the Edo State Economic and Strategy Team inaugurated by former Governor Adams Oshiomole in March 2009.

Obaseki holds post graduate degrees in both Finance and International Business, and is a Fellow of the Chartered Institute of Stock Brokers,Nigeria.

Obaseki served as executive board member of several private companies including Afrinvest. He is the recipient of the Nigerian Union of Teachers (NUT) award for best performing Governor of the year in October 2019.

Obaseki thereafter proceeded to the University of Ibadan, where he obtained a Bachelor of Arts Degree in Classics. For his mandatory one year National Youth Service, he served in Jos, Plateau State. He later left Nigeria for the United States to attend Columbia University and Pace University in New York, where he obtained an MBA in Finance and International Business.

Obaseki is the founding secretary, (1992), of a US-based Africa Chamber of Commerce. He was also a Director of Junior Achievement of Nigeria – the local affiliate of international Not For Profit Organisation.[12]

Obaseki began his career as a stockbroker in 1983 with Capital Trust Brokers Limited, Lagos. He later transferred his services to the International Merchant Bank. He moved to AVC Funds Limited, Lagos, in 1988, where he served as a Project Manager. He moved back to New York and worked as a Principal of Equatorial Finance Company, a Financial Advisory firm. He focused on Africa and provided Structured Trade Finance for African-related transactions.

In 1995, Godwin Obaseki founded Afrinvest West Africa Limited (formerly Securities Transactions & Trust Company Limited (SecTrust), which has grown to become one of the most reputable investment banking and management firms in Nigeria.

Obaseki later stepped down from his position as Chairman of the Board of Directors of Afrinvest in September, 2016, to contest the gubernatorial election in Edo State.

In an article by Vanguard daily, he was tagged the "Wake and See Governor." Pundits say this is because he prefers working and delivering infrastructural projects without prior fanfare or needless rhetoric.

Before becoming the Edo State Governor, Obaseki served as Chairman of the Economic and Strategy Team (EST)[4]. In that capacity, he pioneered a number of policy reforms that saw the state restructure its public finance, secure funding for infrastructure and improve the business environment to attract investment in power, agriculture and other critical sectors. Obaseki was also instrumental in attracting the Edo-Azura power project, with support from World Bank to the state.

Aside these, some of his other reforms include:

For seven years in the administration of Governor Adams Oshiomhole, his predecessor, he served as voluntary Chairman of the Edo State Economic and Strategy Team as well as Chairman of Tax Assessment Review Committee for Edo State Internal Revenue Service (TARC) and the Committee on Micro, Small and Medium Enterprises (MSME), respectively.

Before serving at the sub-national level, Obaseki served on the Presidential Committee on the Reform of the Nigerian Pension System, which facilitated the introduction of the contributory pension scheme and other novel pension reforms.

He also served on the Nigerian Securities and Exchange Commission Committee on the Re-activation of the Nigerian Bond Market and the review of the Investment and Securities Act. Between 2006 and 2009, he served as a member of the Nigerian Stock Exchange Council. He is a Trustee of the Dr Jackson Owen Obaseki Foundation, a family-owned Non-Governmental Organization NGO.

He publicly stated in October 2019 that he will be running for a second term in the State’s Gubernatorial election coming up in 2020 stating that his re-election is non-negotiable.

He was controversially disqualified from contesting in the APC primary elections by the screening committee due to his disagreements with the National chairman of the party and his predecessor in office comrade Adams Oshiomhole.

Since assuming duty as Executive Governor of Edo State on 12 November 2016, Mr. Godwin Nogheghase Obaseki has enacted projects with the aim of making the state an investment hub. Such projects, includes:

Asides his infrastructural projects, he has also enacted a number of social development initiatives. The state government has proposed to build about 200 Primary Healthcare Centres. Obaseki’s focus in the health sector is to develop a viable primary healthcare system to provide affordable and accessible health care services to people in the state. He is also pioneering a state-backed health insurance scheme to provide a robust sector that will attract private investors.

In education, Obaseki launched the Edo Basic Education Transformation (Edo BEST) programme, an initiative to train and equip public school teachers with top-of-the-range skills and expertise for deploying Information and Communication Technologies (ICTs) in classrooms to improve learning outcomes. There is also a strong emphasis on technical education, which led to the revamping of the Government Science and Technical College (formerly Benin Technical College) to train workforce in the state.

He has also vigorously pushed Edo state as a viable investment destination. In January 2018, his government established the Edo State Investment Promotion Office (ESIPO) to facilitate investments and stakeholders engagements so as to improve the business environment in the state.

He has also contributed to the fight against human trafficking and illegal migration.

He is also embarking on a massive reconstruction of the Samuel Ogbemudia Stadium in preparation for the state to host the 2020 National Sports Festival.

On 29 September 2016, Obaseki was elected the Governor of Edo State under the platform of the All Progressives Congress. During the 2020 Edo Gubernatorial Election, Obaseki seeked for re-election but was disqualified by the party's National Working Committee from contesting the primary elections due to inadequate credentials required. On 16 June 2020, Obaseki resigned his membership from the All Progressives Congress. On 19 June 2020, Obaseki decamped to the People's Democratic Party and declared his intentions to seek re-election on the platform. PDP described him as a big catch.

Obaseki is married to Betsy Bene Obaseki, a financial expert. She holds BSc. and MSc. in Accounting from the University of Lagos, and an alumnus of the Kellog’s School of Business Executive Management Programme, USA. He is an avid golfer.