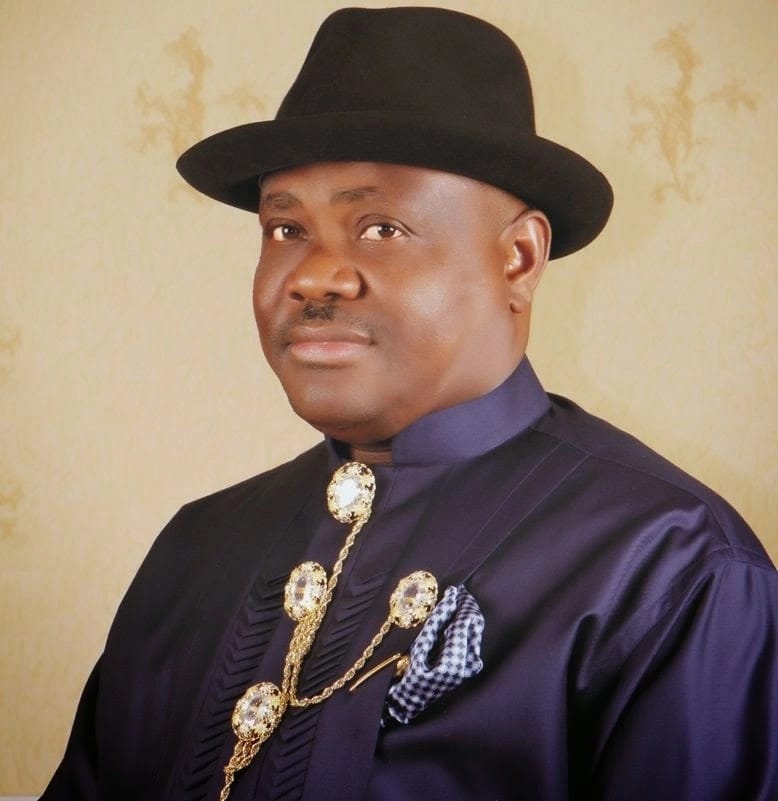 Ezenwo Nyesom Wike is an Administrator, Lawyer, Leader, Politician and the the sixth and current Governor of Rivers State.

Ezenwo Nyesom Wike CON was born on 13 December 1967 into the family of Reverend and Mrs. Nlemanya Wike of Ikwerre in Rumuepirikom Community of Obio-Akpor, Rivers State.

Variously known as Ezebunwo Nyesom Wike, Nyesom Ezenwo Wike, Nyesom Ezebunwo Wike or Nyesom Wike, he is an outstanding administrator, lawyer, leader, politician and the sixth and current Governor of Rivers State. He is a member of the Peoples Democratic Party.Educated at Rivers State University of Science and Technology, he holds degrees in Political and Administrative Studies as well as Law.After a brief stint with private legal practice, Chief E.N. Wike was elected twice as the Executive Chairman of Obio/Akpor Local Government Area. He served his two terms in office from 1999 to 2002 and 2004 to 2007. While in office, Chief E.N. Wike also served as Deputy President, Association of Local Governments of Nigeria, ALGON, in 2004 and was later elected the President of ALGON. He also represented Africa as a member of the Executive Committee of the Commonwealth Local Governments Forum.Barrister Wike distinguished himself as the best performing local government council chairman in Rivers State. As council chairman, he embarked on iconic projects that re-defined council administration and set the right example for his colleagues. As ALGON National President, Barrister Wike played a pioneering role in national security and primary healthcare, leading all local councils to commit themselves to high level grassroots development across the country.Between October 26, 2007 and May 28th 2011, Chief N.E. Wike served as the Chief of Staff, Government House, Port Harcourt and was appointed the Director-General of Governor Amaechis re-election Campaign Organization. On the 14th of July, 2011, Chief E, N Wike was subsequently appointed and sworn-in as the Honourble Minister of State for Education.Following a cabinet shake-up, Chief (Barr.) Wike emerged the nations Supervising Minister of Education on September 12, 2013.As the Minister of State for Education, Chief (Barr) E. N. Wike made remarkable impact in the basic education sub-sector, spear-heading a nationwide reform of the nations education system.The fundamental programmes that were driven by the former Minister of State for Education include the creation of access to quality education for 9million Almajiri children in Northern Nigeria through the construction of dedicated schools in affected states, construction of basic education vocational training schools for out-of-school children in Southern Nigeria and Special Girl-Education Schools for less privileged girls in 16 states of the country.The former Minister of State for Education also championed the free distribution of books across the nation. Over 60 Millions of textbooks and library resource materials have been distributed since 2011.Determined to ensure that teachers have the capacity to deliver on the Transformation Agenda of the Jonathan administration, the former Minister initiated the training of close to 500,000 basic education teachers and school administrators.As the nation�s Supervising Minister of Education, he took proactive measures to resolve key challenges in the basic and tertiary education levels. Under his watch, the Federal Government established four new Federal Polytechnics, with one sited at Bonny, Rivers State. He facilitated the N1.3trillion Intervention fund for public universities in Nigeria, the very first of its kind aimed at reviving university education in Nigeria; and also facilitated the revival of infrastructure in 51 State and Federal Polytechnics and ensured the construction of micro-teaching laboratories in Colleges of Education in Nigeria.His efforts have been recognized by stakeholders within and beyond the shores of Nigeria. He was conferred with the Best Performing Minister, 2011 by the Nigerian Pilot Newspapers, African Network Campaign on Education For All, ANCEFA, awarded him the Policy Champion Award for Africa to recognize his roles in the creation of quality access for Nigeria Children. The Abuja Council of the Nigerian Union of Journalists, NUJ, conferred on him a Recognition Award for Reviving Basic Education in Nigeria,while the Nigeria Labour Congress, NLC, conferred on him Award of Performance in the Education Sector. The former Honourable Minister of State for Education has received several other awards from reputable stakeholders in the education sector who appreciate his investments of energy and intellectual resources in the system.On December 8, 2014, he won the Rivers State Peoples Democratic Party primary and chose former Secretary to the State Government Ipalibo Banigo as his running mate for the 2015 Guber election in the state; which he won and was sworn in as Governor of Rivers State on May 29, 2015.INEC declared him winner of the Rivers State governorship polls on Wednesday, 3rd April 2019, after suspending the process for some days; and was sworn in on May 29, 2019 for a second term.A holder of several traditional chieftaincy titles, Barr. Wike is happily married to Justice (Mrs.) Eberechi Suzzette Nyesom-Wike, a High Court Judge with the Rivers State Judiciary, and they are blessed with three lovely children; Jordan, Joaquin, and Jazmyne.