1987 Finance Class, University of Nigeria, Enugu Campus (UNEC) said they were delighted and grateful to God that Gov. Ugwuanyi has remained humble, peaceful, focused and visionary as he was during their days in the university, stressing that they are proud of the governor.

Members of the 1987 Finance Class, UNEC, counted the people of Enugu State lucky to have somebody like Ugwuanyi at the helm of affairs of the state, especially at this critical period in the life of the country.

Gov. Ugwuanyi’s classmates made the commendation when the Governor hosted them to a cultural night dinner held at the Government House, Enugu, as part of their re-union programmes in Enugu, 35 years after their graduation.

The dinner preceded a visit to the Department of Banking and Finance, UNEC, the next day, which stirred Gov. Ugwuanyi and his classmates to a thrilling reflection of their days of toil, fun and burning of midnight candles in pursuit of academic goals. 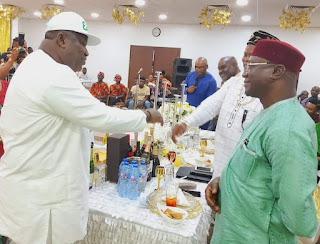 During the visit to UNEC, Gov. Ugwuanyi and his classmates addressed students of the Finance Class, wished them success in life and encouraged them to remain focused and committed to their dreams and aspirations as future leaders.

In their separate goodwill messages at the dinner, a member of the class, Pastor Emeka Roland Ifeonu, expressed gratitude to God for making the re-union a reality, saying: “God has been so good to us 35 years after we parted. Most of us are seeing for the first time; it is just the mercy of God.”

He appreciated Gov. Ugwuanyi for his unique personality describing him as a man of the people and a great achiever.

Referring to the story in the Old Testament where David was a Mercy Carrier but King Saul could not recognise the Mercy Carrier and it cost him his kingdom, Mr. Ben Uba, another classmate of Gov. Ugwuanyi, said that the Governor is “a Mercy Carrier and that the mercy you carry will affect each and every one of us here positively.”

Speaking further, he said: “Your Excellency, the Governor of Enugu State, and my dear classmate, we have come to appreciate our own Gburugburu (Ugwuanyi) worldwide. Gburugburu you will live long, no man will stop you, no woman will stop you, you will get to your Promised Land in the Mighty Name of Jesus, amen.” 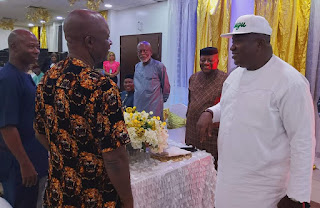 Presenting gift items to Gov. Ugwuanyi as a symbol unity and gratitude, Mr. Ike Duru, on behalf of his classmates, disclosed that it was because of the Governor’s humility that they gathered after 35 years, pointing out that “when he entered, he called all of us by name, that shows who he is, he is the same person he was in 1987."

“I want to tell Enugu State that you people are lucky to have somebody like him. Sir, we are your classmates, we are very proud of you.”

Earlier, members of the 1987 Finance Class observed a minute silence in honour of their departed classmates.

Welcoming his classmates to the Lion Building, Government House, Enugu, Gov. Ugwuanyi said that the occasion was unique and a reflection of where they were coming from.

“Those days of lofty dreams and great ambitions yet shrouded in uncertainty of what life had in stock for us; and most importantly, the friendship we enjoyed in our youth."

“It is also desirable that on the sidelines of this event, we seek and engage our lecturers who were key to our learning and character moulding," Gov. Ugwuanyi said.

The Governor thanked God for their lives, good health and livelihoods, adding that He (God) has been faithful meeting them at their various points of needs and providing for their needs according to His riches in Glory.

Praying for the souls of the departed classmates, Gov. Ugwuanyi said: “For those who have passed, may their gentle souls rest in peace through the mercy of God in Jesus Name. We love and miss them."

“For those of us who could not make this trip, I extend my best regards to them wherever they are.”

Acknowledging proudly, the outstanding accomplishments of the members of the 1987 Finance Class, UNEC, in different spheres of life, the Governor said that “it is remarkable that this re-union is holding at a time one of us is holding sway as the Servant Leader of this State”, adding: “I hold this on trust for Ndi Enugu and indeed all of you.”

Gov. Ugwuanyi further expressed delight that “the stellar achievements of our classmates, present one of the finest stories of a class of students who have lived their dreams and we certainly wear many Badges of Honour”, adding: “It also pleased God and the good people of Enugu State that I be elected for two terms as the Governor of the state."

“I therefore invite you to enjoy the great ambience and serenity of the Coal City while wishing us an exciting re-union experience and bliss.”

In her vote of thanks, former Chief of Staff, Government House, Enugu, Chief Mrs. Ifeoma Nwobodo, on behalf of members of the 1987 Finance Class, UNEC, expressed gratitude to God for the gift of life, good health and prosperity, thanking Gov. Ugwuanyi for making the re-union a memorable one.