Bayelsa State Governor, Senator Douye Diri, has urged corporate bodies and well-meaning individuals to take a cue from the management of Azikel Group of Companies that pledged a donation of N350 million worth of food items to flood victims in the state.

Senator Diri made the call on Monday when president of the firm, Dr. Azibapu Eruani, paid him a courtesy visit in Government House, Yenagoa.

The Governor, in a statement by his Chief Press Secretary, Mr. Daniel Alabrah, commended Eruani, who is a son of the state, for identifying with the flood-ravaged people of the state, noting that it was a demonstration of his love for his people in their time of distress. 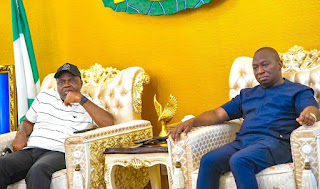 His words: "You are the first person from our state to visit us at your level and capacity and that shows that you hold your people in your heart.”

Diri, who also spoke on the state’s airport road being threatened by the flood, said the government took some urgent steps to rehabilitate portions of the road linking the facility and that the United Nigeria Airlines resumed commercial flights on Monday.

“Let me let Nigerians know that the airport is not cut off. Our airport is functional. That is why Azikel Group today flew into Yenagoa through the Bayelsa airport."

“We took some proactive steps on the road leading to the airport. That road is now motorable and the airline operating here has also resumed today.”

Governor Diri restated his call on the Federal Government to intervene in undertaking repair works on the portion of the East-West road ravaged by the flood at both axis of the bordering states of Rivers and Delta. 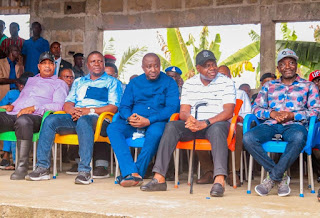 He also urged the Azikel Group to expedite action on its modular refinery project in order to enhance supply of petroleum products to the state.

In his remarks, Dr. Azibapu Eruani said his visit was to offer hope to the people since the State Government alone cannot shoulder the challenges occasioned by the flood.

He said the massive devastation caused by this year's floods informed his management’s decision to donate the food items to the victims. 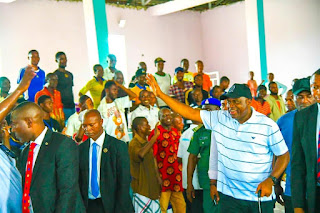 In a related development, the Governor announced the extension of the break for civil servants in the state by another one week.

He had last Tuesday during a state broadcast announced an initial break of one week to cushion the effect of the floods on workers in the state. 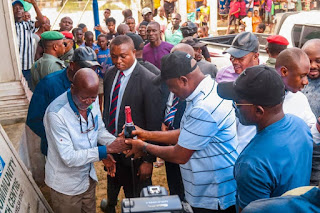 Diri stressed that the compassion of a true leader was felt not only during electioneering period but also in times of distress.

He underscored the need for all to be their brother's keeper,  particularly in this trying times, noting that natural disasters were no respecter of political parties or ethnicity.

In separate remarks, the Commissioner for Education, Dr. Gentle Emelah, and the Member representing Yenagoa Constituency 3 in the State Assembly, Ted Elemeforo, urged the people to see themselves as one and care for one another. 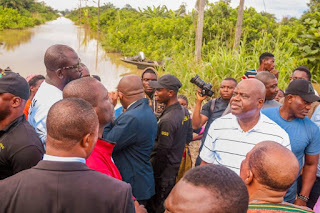 They noted that the presence of the governor was to demonstrate his love for the people and his examplary leadership.