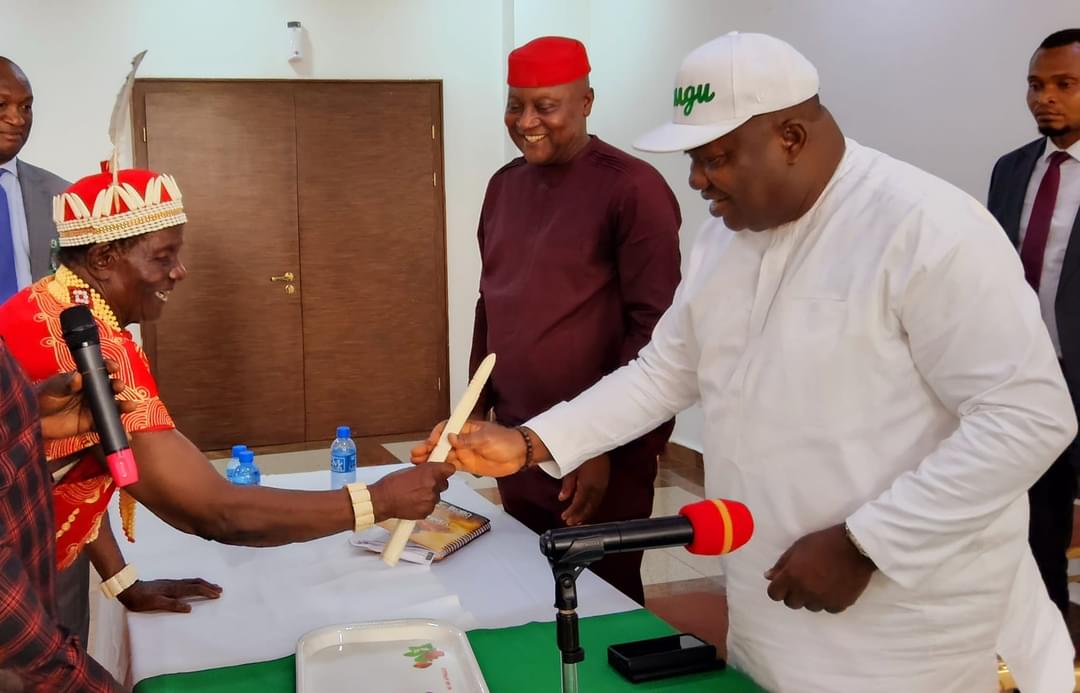 ....Present ‘Ofo’ to Governor as a symbol of endorsement

All the Titled Men from Ibagwa-Ani in Nsukka Local Government Area of #Enugu State, representing the people and stakeholders of the community, have declared the resolve of the community to support and vote for #Governor Ifeanyi #Ugwuanyi and all other candidates of the Peoples Democratic Party (PDP) in the 2023 general election.

The Titled Men, led by the traditional ruler of Ibagwa-Ani Ancient Kingdom, HRH Igwe David Eneja, represented by the Edeoga of the community, Eze Gilbert Ugwuoke, and accompanied by the stakeholders, including the Member representing Nsukka West Constituency in the State House of Assembly, Hon. Dr. Emma Ugwuerua, the former Transition Committee Chairman of Nsukka LGA, Hon. Onyema Idoko, among others, appreciated Gov. Ugwuanyi for the positive developments his administration has impacted on the community.

They said that the positive changes the Governor brought to their community are enormous, disclosing that his administration made it possible for them to have modern healthcare and educational facilities such as the fully equipped health centres at Ibagwa-Ani and Ejuona Ibagwa-Ani.

They expressed gratitude to the Governor for the Ibagwa-Ani central borehole his administration sank for the community among other numerous developmental projects as well as empowerment of their people.

The Titled Men known as ‘Oha Ibagwa’ stressed their solidarity and support for Gov. Ugwuanyi’s senatorial bid, that of the PDP governorship candidate in the state, Dr Peter Ndubuisi Mbah, his running mate, Barr. Ifeanyi Ossai, the PDP candidate for Nsukka/Igbo-Eze South Federal Constituency, Chief Engr. Vita Abba, and all other candidates of the party for the 2023 elections, maintaining that they will vote massively for them as they have no other party in the community other than the PDP.

The people, therefore, presented “Ofo” to Gov. Ugwuanyi as a symbol of their solidarity, support and endorsement of his bid to represent Enugu North Senatorial District in the National Assembly come 2023.

Speaking on their behalf, Chief Basil Obeta Asogwa, listing the Governor’s achievements in Ibagwa-Ani, said: “Your government made it possible for our people to have health centres that are well equipped. Ibagwa-Ani Community Secondary School was affected by windstorm that destroyed the roof of the exam hall, but your government renovated that school for the community".

“Our school had no SS3 hall but your government built a hall for the SS3 students. The health centres are two in numbers. Community Primary School I and 2, and Central School 1 and 2, your government renovated these schools and they are now modern primary schools, among others. All these are what your government did for us that made us to come to say thank you.”

Corroborating Asogwa’s remarks, the Member representing Nsukka West Constituency, Hon. Dr. Ugwuerua, and Engr. Isaac Ugwuaku, reassured Gov. Ugwuanyi that Ibagwa-Ani will deliver the PDP 100 percent at the polls, pointing out that the community has explicit confidence in the governor’s ability to represent Enugu North Senatorial District effectively in the National Assembly in 2023.

“Their mission is to reassure you of our total support. You know the position of our community as it relates to total support to our great party right from 1999."

“Even though there had been oppositions but during elections we deliver 100 percent and 2023 will not be an exception. The same thing will be repeated in 2023."

“So they (Titled Men) have come to reassure you; they have come to show you solidarity; they have come to tell you that if not that campaign is a routine activity, they would have told you not to come for campaign again. Everything concerning 2023, be rest assured that Ibagwa-Ani and indeed the entire Ovogovo will deliver PDP 100 percent.”

According to Engr. Ugwuaku, “Your Excellency, we are telling you thank you. If it is about our votes, we have all concluded that all Ibagwa people will not vote for anybody except Ugwuanyi and your candidates in the PDP including Barr. Peter Mbah and our in-law, Chief Engr. Vita Abba.”

The PDP candidate for Nsukka/Igbo-Eze South Federal Constituency, Chief Engr. Abba, was at the event.