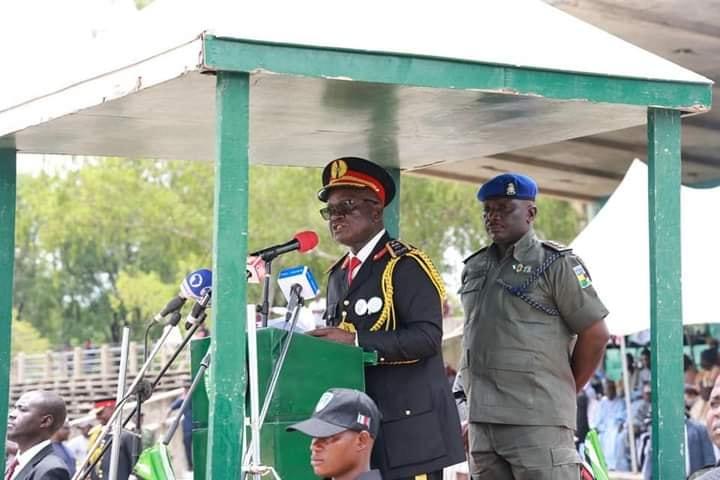 to be vigilant and protect their communities against invasion from terrorists who are bent on taking over their lands.

The Governor who gave the charge on Thursday, October 13th, 2022 during the passing out parade of the second batch of the Benue State Community Volunteer Guards at the IBB Square, Makurdi also asked the security outfit to operate strictly within the ambit of the law and not to get involved in politics in the discharge of their duties. 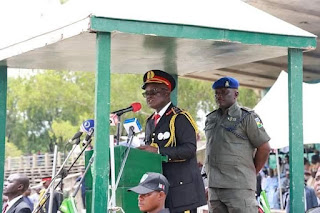 Governor Ortom said, "I urge the Command structure of the Benue State Community Volunteer Guards to operate strictly within the ambit of the law, in order not to betray the powers bestowed on you by the people. Remain apolitical, conscientious, courteous, vigilant and strong to stand firm and protect the people."

According to the Governor, "I have on behalf of the Benue State Government applied to the responsible Federal Government agency for approval to procure automatic weapons, particularly AK47 assault rifles to further strengthen your logistic support base and your defense capability. I am still awaiting approval from the Federal Government to deal accordingly.

"This giant step towards self-defence is indeed a clarion call to Nigerians of nationalistic and patriotic spirit to rise and not only support our cause but also throw in their weight to maintain and sustain our lives and nationhood. 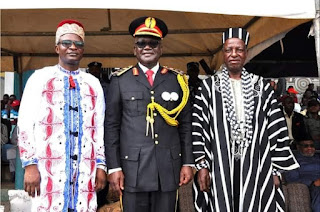 He insisted that if the Federal Government continued to pay deaf ears to the State Government's request for the license to procure lawful weapons for the Volunteer Guards to curb insecurity, "I will seek the counsel of Benue people on the next line of action as I have their mandate."

He further maintained that "State Governments are currently working with the Federal Government of Nigeria towards moving from community policing to State Police"  stating that "When this eventually becomes a reality, we will give the current Community Volunteer Guards the preemptive rights to join the State Police. That is, the first right of first refusal."

Governor Ortom explained that in order to enhance the effective operation and proper coverage of the State, the Benue State Government has decided to train an additional 1,100 personnel to the 500 earlier trained and inaugurated on 4th August, 2022, stating that the target is to recruit 10,000 Volunteer Guards before the end of his administration. 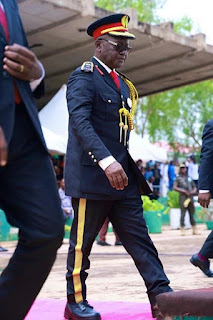 "I wish to reiterate that the essence of the Benue State Community Volunteer Guards Law as amended is to complement the formal security agencies, especially the Nigeria Police in crime prevention and securing of lives and property in Benue State.

"I believe, all well-meaning Nigerians feel very challenged over the spate of wanton killings and abductions being meted out to Nigerians, especially on the unprotected rural farmers, travelers and defenseless students.

"All of us, as Nigerians, have a responsibility to check this evil, the intrusion of those who are set to decimate, take over and control our resources and destiny as a nation with every deserving force and will," Governor Ortom insisted.

He further stated that "The training and passing-out of the second batch of Benue State Community Volunteer Guards is not just a mere celebration of the involvement of the people in protecting themselves but also, a milestone in the effort to ensure a stable, peaceful and united Nigeria where all and sundry shall enjoy equal rights and God-given freedom." 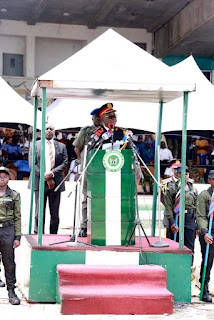 While commending the strong will of the security agencies towards fighting the menace of insecurity across the country, Governor Ortom urged them to remain resolute and committed to defending the country.

Earlier, the Special Adviser to the Governor on Security Matters, Lt. Col. Paul Hemba said the State Government was getting positive feedback on the operation of the Volunteer Guards since the inauguration of the first batch, stating that personnel of the security formation arrested a Cameroonian terror group known as Ambazonian fighters in Kwande Local Government area.

He disclosed that the Security Council has approved the establishment of a marine wing of the Volunteer Guards, stating that plans were also on to acquire boats for the patrol of the waterways to check any security incursion.

According to the Security Adviser, the second batch of the Volunteer Guards was trained by the military and paramilitary resource persons in areas such as practical weapon handling, radio communication skills, intelligence gathering and unarmed combat, adding that they were permitted by law to bear unprohibited light weapons.

In his remarks, the Speaker, Benue State House of Assembly and Peoples Democratic Party, PDP, Governorship candidate, Engr. Titus Uba said the State Assembly has endorsed the establishment of state police to strengthen security in the country, noting that the Assembly amended the State Vigilante Law of 2000 which paved the way for the establishment of the Community Volunteer Guards.

The Och'Idoma, His Royal Majesty, Elaigwu Odogbo and the Tor Tiv, His Royal Majesty, Professor James Ayatse who was represented by the Tor Kwande, Chief Ambrose Iortyer in separate goodwill messages, pledged the commitment of the traditional institution to support the Volunteer Guards to succeed.

They declared Governor Ortom is fighting a just cause, stating that the establishment of the Volunteer Guards was not targeted at waging war against any ethnic group or neighbours of the state, but only to complement the efforts of conventional agencies in providing security for lives and property, especially at the grassroots communities.

President General of the Tiv Youth Organization, Timothy Hembaor also delivered a goodwill message on behalf of other youth and socio-cultural organizations in the state, expressing the readiness of the youth to resist the invasion of Benue communities.