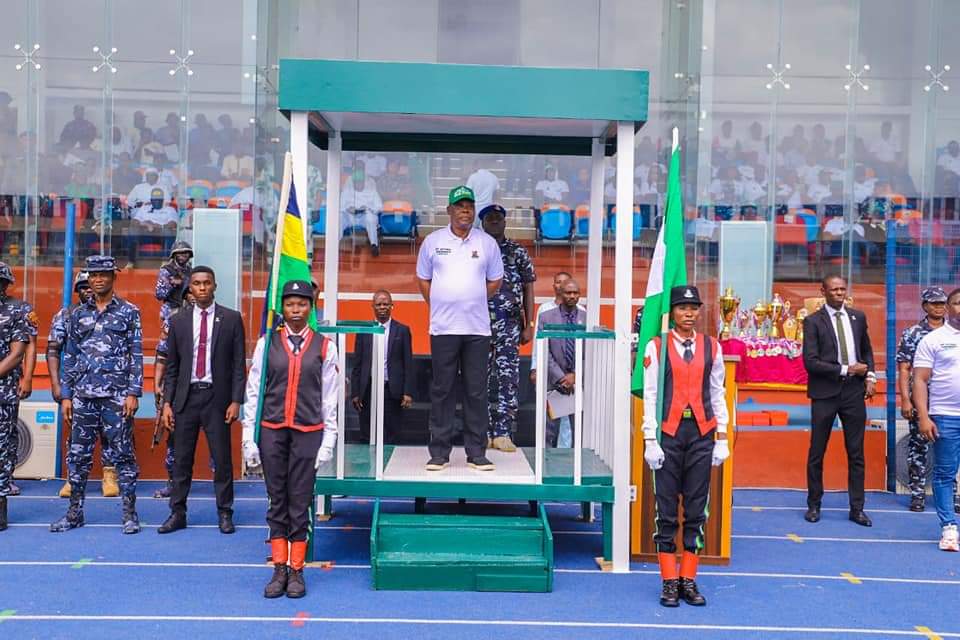 ...pledges to continue to make lives meaningful for Oyo people

Oyo State Governor, 'Seyi Makinde, on Saturday, called on Nigerians to collectively raise the bar of development in every area of their lives.

The Governor, who was represented by his deputy,  Barr. Abdulroheem Adebayo Lawal, made the call on the occasion of Nigeria's 62nd Independence anniversary, held at the Lekan Salami Sports Complex, Adamasingba, Ibadan.

A statement by the Chief Press Secretary to the Governor, Mr. Taiwo Adisa, quoted the Governor as saying that he would continue to make life more meaningful for all residents of the state.

He explained that though Nigeria has come of age in terms of number of years of nationhood, it cannot be confidently said that it has been molded into a nation that is set to fulfill its potential.

He said that in the case of Oyo State, the administration has taken steps aimed at lifting the bar of governance.

According to him, the monumental developments already pioneered by his administration are capable of lifting Nigeria to greatness if adopted on a national scale.

He said that the free and qualitative education of his administration has made more than 40,000 out-of-school children return to school.

He said: "I am truly delighted to be in your midst today as we all gathered here to celebrate yet another birthday of our beloved nation, Nigeria."

"I am happy to see young and old, pupils, students, and the working class in a march past in colourful attires, paying obeisance to the national flag, the symbol of our nationhood."

"It reminds me of many years back, when as school children, we gleefully and enthusiastically rushed to the stadium on days like this to participate in the joy of Independence anniversary."

"At 62, we should be rolling out the drums in celebration that our country has come of age." 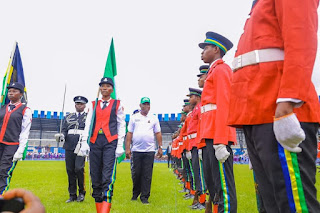 "Yes, we have come of age in terms of number of years, but sadly we cannot confidently say that we have molded a nation that is set to fulfill its potential."

"Despite the aura that usually pervades anniversaries such as this; the real truth of our situation indicates that it may not be the time to roll out the drums yet."

"This is because as the saying goes, several waters have passed under the bridge."

"In 62 years of nationhood, we have had the lot of a checkered history that showcases us as a country bedeviled by perpetual travails, a divided house with a cacophony of tongues, and an assemblage that keeps grappling with stunted growth."

He added that many have situated the nation's  predicaments on the failure of leadership, others have attributed the crisis to bad followership.

He said that Nigerians must now rise above what he called the perpetual search for culprits  and "rise above the tides of discord, degradation, decline, and underdevelopment."

He added: "We must collectively raise the bar of development in every area of our lives."

"It is our firm belief in Oyo State that for the sleeping giant, Nigeria, to rise to its potential, citizens and leaders must play their part positively as true stakeholders, without which the tales of woes would only continue to get elongated."

"Here in Oyo State, as a government in charge of one of the key federating units of the country, we have never shied away from taking bold steps with singularity of mindset and determination to make a difference."

"Our Poverty to Prosperity mantra, an offshoot of the four key pillars of this administration, which includes Security, Health, Education, and Expanded Economy through the agribusiness value chain, which were distilled from the Roadmap for Accelerated Development of Oyo State, 2019 to 2023, is working wonders in the different aspects of life including Human Capital Development; enhancing the ease of doing business through positive economic indices; quality infrastructure; empowerment of residents and indigenes with good economic fortunes; welfare policies for workers, indigenes, and residents; as well as the assurance of a hopeful and good life through sound health policies and free and qualitative education."

"As we all can see, the government in Oyo State is playing its part by taking steps to ensure that our people live a meaningful life."

“The free and qualitative education has already ensured that more than 40,000 out-of-school children have returned to school, while parents who were forced to move their wards to private schools due to the deplorable standards of education in the public schools are rushing to return their wards to our revitalized schools."

"Apart from the provision of furniture and books to students, this government has built over 600 schools with 60 model schools also constructed."

"We are remodeling 351 primary healthcare centres at one per electoral Ward, while our Light-Up Oyo Project has covered over 200 kilometres of road across the seven zones of the state."

"This administration is building over 500 kilometres of roads, linking up the zones of the state and our neighbouring Ogun and Osun States."

"In the area of security, I make bold to tell you that no fewer than six states of the country have visited Oyo State to understudy the unique security architecture of the state. I am confidently reporting to you all that our administration has raised the bar of development in every aspect of human endeavour."

"I have no doubt in my mind that the monumental development we have pioneered here in Oyo State is capable of lifting Nigeria to greatness if adopted on a national scale."

The event witnessed the traditional march past, cultural display, presentation of prizes to winners of quiz and essay competitions, Tug of War and Ayo-Olopon.