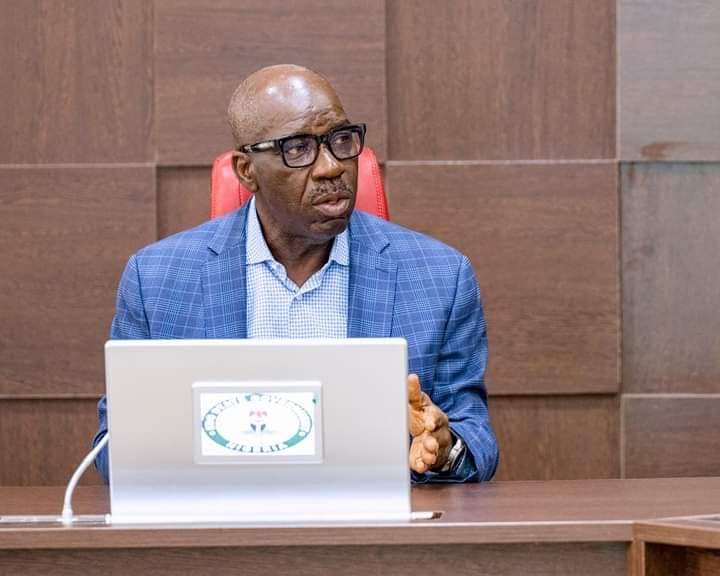 My dear good people of Edo State, it is with great delight that I join you today, October 1, 2022,

to commemorate the 62nd Independence celebration of our dear country Nigeria. The occasion affords us the opportunity to reflect on our collective journey as a sovereign nation towards self-actualization and shared prosperity.

The task of nation-building has been daunting these past six decades. However, despite our several challenges as a nation, we have held strongly to the belief in one Nigeria and have held together as a nation.

One achievement that we can continually be proud of is that since 1999, we have been able to sustain the Fourth Republic which has now lasted 23 years. This is the first time since our independence that a generation of Nigerians have had the opportunity to grow up in a political environment undisturbed for over two decades. This is highly commendable.

Despite the tremendous challenges which we have faced as a country, particularly in the last seven years, with insecurity, communal clashes, ethnic tensions we have continued to trudge on.

In our own little way in Edo State, we have made concerted efforts to alleviate the pains faced by our citizens and make life more bearable for our people. Working with the limited resources we continue to deliver on infrastructural projects, transform our civil and public services, create avenues for inflow of private investment and provide a pathway for the empowerment of our youths.

In spite of political distractions, we have kept our eyes on the ball, and have continued to prioritize the interest of our people and reconfigure the economy of our state to be responsive, vibrant and productive.

In recognition of the sacrifices that our citizens continue to make in the face of the very difficult and hash economic and social environment, we decided to increase the minimum wage in Edo State from N30,000 to N40,000 per month so as to ameliorate the suffering caused by rising food prices and inflation. We also continue to ensure that the business environment is conducive for private businesses to thrive.

Since I assumed office, I have placed premium on law and order and the need to respect property rights. Without protecting the property rights of Edo citizens, it will be difficult to attract investments and capital to the state. Thus, we have had to rein in the activities of non-state actors and overlords who intimidate, maim, oppress and deploy the instrument of violence to defraud people and rob them of their hard-earned resources including landed properties.

We are resolute in our determination to restore and preserve the land administration system in the state. This is why we have intensified the campaign against land-grabbing. We are determined to rid our state of these non-state actors and overlords who have become a nuisance and deprive communities and individuals of their properties. We are going to bring the full weight of the law upon the individuals and groups involved and bring the perpetrators and their collaborators to justice.

We have taken possession of a government acquisition in the Irhirhi-Arogba-Obazagbon-Ogheghe axis of the Benin metropolis for the development of a new town. The new town is the first phase of the Benin Masterplan, which is intended to redistribute the city’s population in a properly planned settlement.  I want to assure the citizens of Edo State that my government has set up a special squad which will recover every inch of land illegally converted by land grabbers from communities and individuals.

In order to grow the economy of our state and encourage manufacturers and producers to locate their industries and businesses in Edo State, we are encouraging investments in the electricity sector.

Apart from our investment in the Azura 450MW and support for the 95MW Ossiomo Power projects, we have now passed a law setting up the Edo State Electricity Commission. The purpose of this law is to establish an independent Electricity market in Edo State. It is expected that this will attract investors to generate and distribute electricity within Edo State particularly to underserved communities.

We continue to look for ways to obtain resources to provide more services for our citizens. In the light of the prevailing economic realities, there is an urgent need to reduce waste and redesign government to be more functional and more responsive in providing efficient public service to citizens

We have redesigned government to become more streamlined and functional, ensuring that we are focused on delivering optimal service to the public. Therefore, State Government ministries have been cut down from 22 to 18, while MDAs have been reduced to 72, from 105. This has been done without retrenching or laying off any worker from the civil or public service.

With a revamped public service, we intend to deliver more efficient services to Edo people. Civil and public servants are now receiving intensive training at the John Odigie Oyegun Public Service Academy to prepare them to deliver on their responsibilities.

I empathize with Edo people over the impassable state of Federal Roads that crisscross our state. For commuters going through the Benin-Sapele Road, Benin-Agbor-Asaba Road, Lagos-Benin Road and the Benin-Auchi Road, I know the horrible and frustrating experiences you have been enduring. The Benin-Auchi Road, which is the back-bone and main artery connecting all our senatorial zones, and which connects Edo State and other southern states to the Northern part of the country, is the most appalling. It is regrettable that despite all entreaties, the Federal Ministry of Works has continued to treat us as if we are not part of Nigeria.

We have at several times embarked on palliative work on the failed portions of these roads, but it is clear that what is needed is reconstruction work, which rests on the federal government who own these roads.

We therefore appeal to President Muhammadu Buhari to make the reconstruction and rehabilitation of these roads a priority for the remaining months of his tenure in office.

The 2023 general elections is going to be a watershed moment for our country, as it will determine who will pilot the affairs of the country for another four years. The campaigns for the general elections have commenced in earnest. I appeal to all stakeholders to conduct themselves responsibly, by carrying on with their campaigns in line with the provisions of the Electoral Act.

As we celebrate Nigeria’s Independence Day today, I urge you to be hopeful and remember that bad times don’t last forever. Continue to play your part to make Nigeria prosperous again and by the Grace of God Nigeria will overcome its present challenges.

Happy Independence Day to all Nigerians