The Governor of Oyo State, 'Seyi Makinde, said on Sunday that Nigerians should cast their votes in defence of good governance during the forthcoming general elections in 2023.
Governor Makinde, who stated this while speaking at the Special thanksgiving church service to commemorate Nigeria’s 62nd Independence anniversary, held at the Cathedral of St. Peters, Aremo, Ibadan, said that Nigerians need to keep hope alive as according to him, there is light at the end of the current dark alley in the country.
He urged the people to keep hope alive and be steadfast in their prayers for the nation. 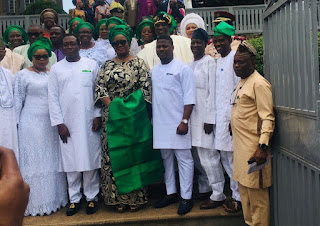 The governor, who was represented by the Secretary to the State Government, Mrs. Olubamiwo Adeosun, stated that despite the series of challenges th3 country is witnessing, the people need not lose hope.
A statement by the Chief Press Secretary to  the governor,  Mr. Taiwo Adisa, indicated that though the country has never been as divided and challenged as seen under the current administration, there is hope of a better tomorrow.
The statement quoted the governor as saying that though
the country is facing challenges in the area of security, banditry, kidnapping and other crimes, the government in the state has decided to rise above the national malaise by faithfully implementing its poverty to prosperity agenda, thereby recording a series of life-changing achievements.
He urged the electorate to cast their votes in defence of good governance and service delivery during the next general elections.
He said:
"This time last year, we gathered in this same auditorium to give thanks to the Lord Almighty for making us witness the 61st Independence anniversary of the country.
"Just like a twinkle of an eye, the clock has turned on another 365 days and we are here to give thanks to the Almighty for the dawn of the 62nd independence anniversary of Nigeria."
The governor added that aside the rise in crimes and criminality, the country is also burdened by economic difficulties, which he said appears to defy social-scientific prognosis.
He stated:
"A peep at the front cover of any of the national dailies published in Nigeria easily portrays a country in dire straits.
"But our message today is that of hope.
"That there is light at the end of the dark alley and like Moses confidently declared to the children of Israel in Exodus 14: 13, the Egyptians whom we see today, we shall see no more forever, Amen."
He said that Oyo State has, however, been able to stay afloat despite taking its share of the national crisis.
He said: "But here we have chosen to ride the storm through the faithful implementation of the Poverty to Posterity mantra of this administration.
"In line with our dedication to rise above the national tide, this administration launched the Roadmap for Accelerated Development of Oyo State, 2019 to 2023 immediately we assumed office on May 29. 2019.
" And with the religious implementation of the four-point service delivery agenda encapsulated by the roadmap, we isolated the four key existential realities of human beings including Security, Health, Education, and Economic expansion, using the agribusiness value chain.
"Without Security, life is hellish; without good Health, life is gloomy; without Education, life is in despair and without a good Economic prospect, life is melancholic.
"Thus, our state set sail with well-grounded policies that yielded 100 well-equipped security vehicles for security agencies within 100 days in office; creation of community policing initiatives and the Amotekun corps;  turn-around of State
Hospitals across the geopolitical zones; remodeled 351 primary healthcare centres at one per electoral ward; free and qualitative education from primary to secondary schools as well as infrastructure development targeted at economic expansion that has yielded the construction of over 500 kilometres of roads (ongoing and completed) as well as the consistent increment in the Internally Generated Revenue of the State, even in the heat of the Covid-19 pandemic.
"The result of the carefully welded service delivery programme, e capsulated in the Four-point service agenda, is the positive outcomes being witnessed in the state today.
"Ibadan, the State capital has been ranked as the second fastest growing city in Africa, according to a rating by the United Nations Human Settlements Programme (UN-Habitat).'
"Cities and zones of the state are being linked with brand new roads, a Light-Up Oyo Project covering over 200 kilometres of roads across the state is up and running, while we have equally turned around the skyline of the state with projects such as the bus terminals, remodeled stadia, and others.
"As our people go to the polls in February and March 2023, I can only urge you to cast your votes in defence of good governance and service delivery."
In his sermon, Bishop of Ibadan North Church of Nigeria (Anglican Communion), Rt. Rev. Williams Aladekugbe,urged Nigerians to always be their brothers 'keeper
He called on  those in the position of power and authority to use their positions to uplift the less privileged people in the society.
He also decried the worsening insecurity and economic challenges in the country.
According to him, the development is due to the lack of capacity on the part of those at the helms of affairs.
Aladekugbe, urged the Federal Government and the Academic Staff Union of Universities (ASUU) to resolve their issues and end the strike without further delay.
He stated that the strike was seriously affecting the entire teaching and learning system among students and their lecturers across the country.
The Clergyman commended the Governor Makinde- led administration for the regular payment of the workers' salary as and when due, adding  that the series of infrastructural  projects  being undertaken by the current administration in Oyo State are visible across the nooks and crannies of the state.
He later prayed for the success of the administration in its bid to develop the state further.
The event had in attendance the Head of Service, Alhaja Ololade Agboola, Commissioners, Special Advisers, Special Assistants,Permanent Secretaries  and other political  appointees.