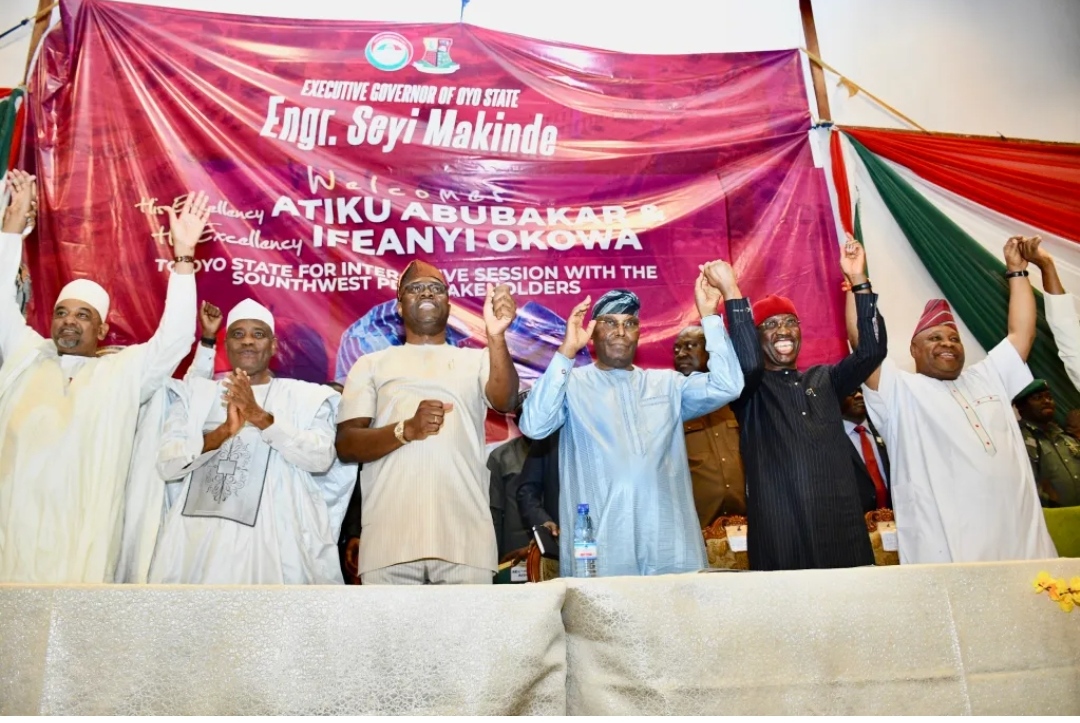 …Your request achievable, but must follow due process -Atiku

South West leaders of the Peoples Democratic Party (PDP) resolved on Wednesday to back the presidential aspiration of former Vice President Atiku Abubakar and his running mate in the 2023 election, Senator Ifeanyi Okowa, declaring however that the National Chairman of the party, Dr. Iyorchia Ayu must resign.

Oyo State Governor, ‘Seyi Makinde, who spoke on the details of the resolution of the South West PDP, said that the zone had classified its demands from Atiku into two, including pre-election and post-election demands, adding that for the party to feel reassured that the party is being inclusive, the lopsided sharing of its national positions must be reversed before the elections.

Makinde spoke on Wednesday, at the South-West PDP Stakeholders' Interactive Session with the party's presidential candidate, Alhaji Atiku Abubakar and his running mate, Senator Ifeanyi Okowa, held at the Theophilus Ogunlesi Hall, Ibadan, noting that the South West leaders believed that Atiku is capable of moving Nigeria out of the doldrums the All Progressives Congress (APC) had plunged it in seven years.

A statement by the Chief Press Secretary to the Governor, Mr. Taiwo Adisa, quoted the Governor as describing Atiku as a unifier, adding that he was confident the party’s presidential candidate has the capacity to reposition the country.

The statement, however, quoted Makinde as telling Atiku to look inwards by first supporting the restructuring of the party and uniting its members before the elections.

Governor Makinde, who explained that the insistence of Governors Nyesom Wike, Samuel Ortom, Ifeanyi Ugwuanyi and himself, that the PDP must play a politics of inclusion by allowing the National Chairmanship post to move South, should not be seen as having a problem with the party or the presidential candidate, as according to him, the governors have left the issue of presidential primaries behind them.

He maintained that the message of the South-West PDP to Atiku is that the National Chairman, Dr. Iyorchia Ayu, must step down and the Working Committee of the Party should be restructured to reflect national unity.

He said: “I want to thank everyone for coming for this meeting and I think, at this point, we have to tell ourselves nothing but the truth."

"What we will do here is to speak the truth to ourselves. Yes, others have spoken here about the positive side of things but we do have challenges and issues to address in our party. But one good thing is, we have the capacity to address those issues."

“Of course, I have seen people abuse me on social media, saying this issue is about Wike, Makinde, Ortom and Ugwuanyi, but the truth is we don’t have any issue either with our party or our presidential candidate."

"If there are challenges, we must bring them on the table so that we can address them to ensure that our journey is smooth and we can get to our destination. So, this is not about individuals."

“I see some people talk about what cropped up during and after the presidential convention when somebody was selected as Vice Presidential candidate. Truth is, those are issues that are behind us. They have happened and they have happened but this is where we are. Are there issues coming out of those that we really need to address so we can be successful at the end of the day? The answer is yes and we will address them. Integrity and honour must be a part of our national psyche."

“We have spoken about the movement; the youth and we have spoken about what they are looking for. Our people are in a state of hopelessness, which the APC brought upon us and it is the reality but we are supposed to give hope to our people. We want them to listen to us, to hear our message to them. For us to be able to do that, we must lay a good example."

“We say we want to rescue Nigeria. Our candidate is a unifier and he will unify Nigeria. We want to restructure Nigeria. I have listened to our candidate both publicly and privately and we have had several interactions. Our party is talking about a government of national unity because close to eight years of APC has left us badly divided. Well, the issue is, we must practise what we preach."

In his speech, the presidential candidate of the PDP, Alhaji Abubakar, said what Governor Makinde and others were calling for is achievable, but the party’s constitution, rules, regulations and procedures must be adhered to.

Atiku said: “I feel happy to be in Ibadan today to interact with you the stakeholders of our party in the South-West."

“The most important event facing us today is the election of 2023 and how to win. From what I have seen in Lagos and Ibadan, I can tell you that we can win the election if we want to and it is possible for us to take over all the Southwestern states."

“More so, the new Electoral Act has improved our electoral processes and has made it difficult for people to write results. They cannot do it anymore and they cannot rig. If they send thugs to snatch ballot boxes, they will not be counted. So, the era is over. The most important thing for you is to make sure you are registered to vote and protect your vote."

“PDP is the oldest political party in Nigeria since the return of democracy. Over time, the PDP has developed its own constitution, electoral processes, zoning of offices, power sharing and others, which will bring about the unity of the party and that of the country. I have no problem with wherever any of the members of the party comes from but it must be done in accordance with our constitution, regulations and practices."

“Therefore, what Governor Makinde is calling for is achievable under our constitution, rules, regulations and procedures. So, those institutions must serve as guides to whatever changes we make. That is why we cannot do anything outside the constitution unless it is amended to reflect what we want them to be."

“Of course, we don’t say people should not have different views but all views must go through our constitution, rules and practices. Otherwise, we cannot give this country the kind of leadership they want. So, it is time for us to return the PDP back to power.”

Earlier, the Vice Presidential candidate, Senator Okowa; chairman of the PDP Governors' Forum, Rt. Hon. Aminu Waziri Tambuwal; Osun State Governor-elect, Senator Ademola Adeleke and the acting National Chairman of the PDP, Iliya Damagun, former Governor Olagunsoye Oyinlola, Senator Biodun Olujinmi, all spoke on the need for the party to forge ahead as a united front adding that the PDP has demonstrated the readiness to win the Presidency and liberate Nigerians from the hardship brought upon the country by the APC.