has reiterated the State Government’s commitment to the improvement of education at all levels in the State.

Represented by her Senior Special Assistant on Administration, Barr. Gilbert Nria, Dr. Banigo   said “that is why there is no ASUU strike in Rivers State tertiary institutions”. 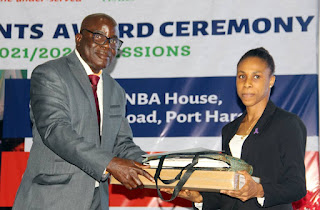 According to her, “amongst the projects recently commissioned are three new campuses of the Rivers State University, located at Emohua, Etche and Ahoada Local Government Areas, and a World Class reconstructed, Secondary School at Obuama in Degema Local Government Area to crown it all. I am happy to inform you that the Port Harcourt Campus (Nabo Graham-Douglas Campus) of the Nigerian Law School has been completed and is ready for use. A Deputy Director-General of the Campus has already been appointed. Inspectors from both the Council of Legal Education and the National Assembly described the Campus as one of the Seven Wonders of the world, the best in the country”.

The Deputy Governor, commended the O. B. Lulu-Briggs Foundation for the grant given to law students, especially at this time when the cost of education at the Nigerian Law School is increasing by the day, noting that the O. B Lulu Briggs Foundation’s response has definitely encouraged the affected students greatly in their pursuit and aspiration to become lawyers.

She called on other NGOs to emulate the O. B. Lulu-Briggs Foundation to carry out corporate social responsibilities in our society as a way of complementing the Government’s efforts in educational development.

In his remarks, the Chairman of the Occasion who is also the Chief Judge of Rivers State, Hon. Justice Simeon Chibuzor Amadi said Chief O.B Lulu Briggs is one of those that the Judiciary would continue to honour and remember as he has always identified with them.

“What we are doing here today is something that every one should appreciate, as investment in human beings is important and the late Chief identified himself with this. We all must surely go one day but we can only be remembered by what we have done, negatively or positively.

I want to urge those behind this Foundation to continue with it and fore go anything that will pull it down’.

In her remarks the Chairman of O.  B.  Lulu Briggs Foundation Dr. (Mrs) Seinye Lulu Briggs said the goal of the Law School Students Grant is to lift some of the high financial burden demands and requirement of attending law school off students and their families.

She said it was a special event because they were celebrating their 20th anniversary this year and the first outing after the Covid 19 pandemic, adding that the ceremony includes the 2020/2021 and 2021/2022 awardees, a total of 114 Law graduates were presented with grants.

A former President of the NBA and former Attorney –General of Rivers State Hon. Okechukwu Emmanuel Wali presented a Lecture on the topic “The Legal Profession: The Lawyer, Ethics and Corruption in Nigeria.”