Governor Okezie Ikpeazu has commended the Men's Ministries of Assemblies of God Church,

Umungasi Aba, off Aba Owerri road for replicating the cement pavement technology introduced by his government in constructing the road leading to their church 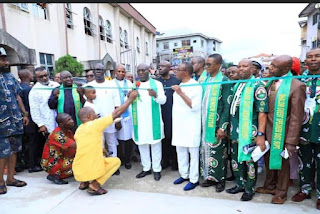 Governor Ikpeazu was speaking earlier today while commissioning the road as part of ceremonies to celebrate the 2022  Men's Day of the church. He said he would offset the outstanding balance of the cost of constructing the rigid pavement road and assured that he would asphalt the road as well as provide the entrance gate the church requested for. The Governor challenged other churches and other organizations to take a cue from what this church has done.

He described the theme of their programme "Stand In The Gap" as apt, saying that government needs more people and groups that would stand in the gap to bring about development of the State. According to him, many of the roads he has fixed are federal government owned roads, but he fixed them in order to uplift the lives of the people. He said God's hands is on his administration, hence under him, Abia has witnessed peace and security and requested for continuous prayers of the church and expressed confidence that Abia's tomorrow would be better than today. 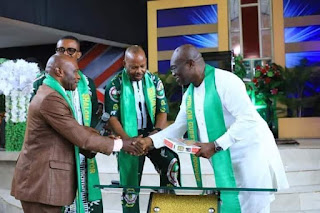 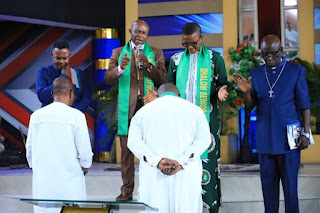 Earlier, the General Secretary of the Men's Ministries of the Church, Bro. Chimaobi Umechuruba thanked Governor Ikpeazu for coming to commission their road. He informed that the national men's day celebration offers them opportunity to work for God and said they have a challenge of a modern entrance gate into their church.

Highlight of the event was prayers  made for the Governor and Abia State government while the event attracted many dignitaries including PDP Governorship candidate in the State, Professor Uche Ikonne, members of the State House of Assembly, Honorable Commissioners, among others.