has given thumbs up to the state-sponsored football team, Bayelsa United, after emerging champions of the Group B2 Southern Conference of the 2021/22 Nigerian National League (NNL). 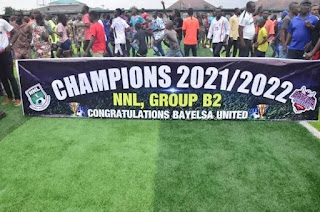 The win sealed the team’s promotion back to the elite league seven years after dropping out of the Nigerian Professional Football League (NPFL).

Governor Diri in a statement by his Chief Press Secretary, Daniel Alabrah, on Sunday, expressed delight that after several close attempts, Bayelsa United eventually gained the much-sought promotion to the NPFL.

He commended the resilience and dedication of the players as well as the commitment of the Coach Diepreye Teibowei-led technical crew, saying they have again brought pride to the state.

The governor also praised the chairman, Ebiki Timitimi, and other board members for their focus in ensuring that they deliver on his charge to them.

He recalled that like in 2021 when the state recorded a double in the victory of Bayelsa United and Bayelsa Queens in the male and female categories of the AITEO/FA Cup, both teams have again won their respective leagues this year. 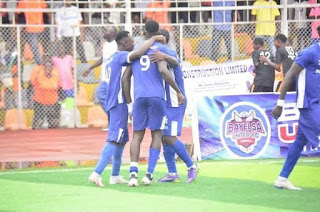 The Bayelsa helmsman said his administration’s investment in sports and human capacity development was no fluke as evident in the performance and achievements of the state in sports in the last two and a half years.

He stressed that the investments were geared toward positively engaging youths of the state and urged them to take advantage of the numerous opportunities created by the government.

Ahead of the decisive game, the governor visited the team in training on Thursday and charged the players to ensure victory, promising to double their match bonus and host them to a dinner afterwards.