Members of Ohanaeze Ndigbo, #Enugu State Chapter, on Wednesday, reiterated their solidarity, loyalty and support to #Governor Ifeanyi #Ugwuanyi and the declarations by various groups and senatorial districts mandating the Governor to choose his successor as was done by his predecessors. 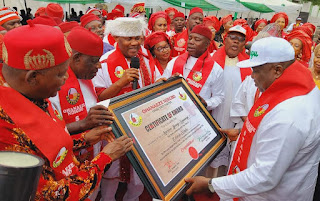 Members of the apex Igbo socio-cultural organisation who made their position known when they paid a solidarity visit to Gov. Ugwuanyi at the Government House, Enugu, reassured the Governor of their unalloyed support and solidarity, stressing that they are solidly behind him and his political decisions ahead of the 2023 elections.

Gov. Ugwuanyi, who is the candidate of the Peoples Democratic Party (PDP) for Enugu North Senatorial District in the 2023 general election and the leader of the PDP in Enugu State and the South East geo-political zone, had endorsed the party’s governorship candidate in the state, Barr. Peter Ndubuisi Mbah, to succeed him in office, in 2023. 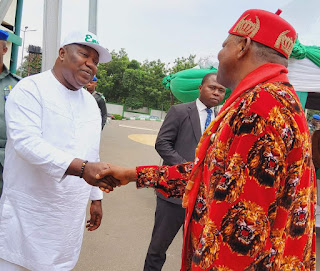 Speaking on behalf of the members of Ohanaeze Ndigbo, Enugu State Chapter, including the State and Local Government executives, the youth and women wings, the national officers from the state and Presidents-General of Town Unions, the President of Ohanaeze Ndigbo in the state, Prof. Fred Eze, commended Gov. Ugwuanyi for his numerous achievements in all spheres of development despite avalanche of challenges confronting the country.

Prof. Eze applauded the Governor for the enduring peace he has entrenched in Enugu State, stressing that “it is not surprising that your remarkable signature of peace is emblematic of everything you touch including the ever contentious party politics.” 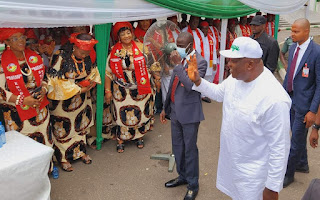 The Ohanaeze Ndigbo President told Gov. Ugwuanyi that members of the organisation are impressed with the “thousands of kilometers of asphalted roads criss-crossing the nooks and crannies of Enugu State with state of the art bridges and drainages you have constructed.”

He pointed out that the Governor “constructed new hospitals and courts of justice more than any other governor in the history of Enugu State,” adding: “You have also empowered thousands of Enugu State youths through exposure to training and skill acquisition.”

Further enumerating Gov. Ugwuanyi’s remarkable achievements, Prof. Eze said: “Our Governor has capped it up with a world-class flyover bridge at T-Junction, Nike Lake Road; a new stadium at Nsukka and a brand new State University of Medical and Applied Sciences (SUMAS), Igbo-Eno, Enugu State which has been fully licensed for operation by the National Universities Commission (NUC)." 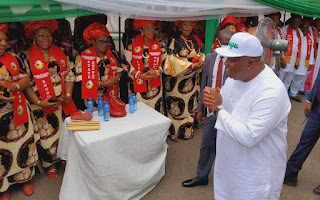 “We also acknowledge with gratitude the take-off of the Federal Polytechnic, Ohodo which you attracted from the Federal Government.”

The Ohanaeze Ndigbo President stated that the members of the organisation in Enugu State “voluntarily and deliberately” visited Gov. Ugwuanyi “to come and honour you and express our solidarity with you.”

Speaking on Gov. Ugwuanyi’s milestone achievements in the education sector, Prof. Eze revealed that the group is exceedingly delighted at the Governor’s investments in the sector which he said have started yielding bountiful results.

“The report of the latest study by the National Bureau of Statistics (NBS) and StatiSense indicates a stellar performance by the Enugu State students at the 2021 WAEC examination with a score of 93.9 percent coming tops of all the states in Nigeria in public schools. This is an outstanding performance and it is kudos to Your Excellency,” he said.

Throwing their weight behind the Governor’s political aspirations and choice of successor, the state chapter of Ohanaeze Ndigbo declared: “Your Excellency, as the current political season draws nearer, Ohanaeze Ndigbo Enugu State followed with keen interest the declarations by various groups and senatorial districts mandating you to pick your successor as was done by your predecessors". 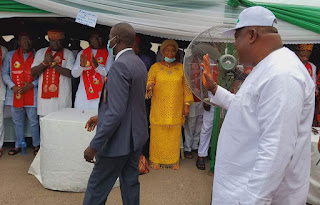 “There was an overwhelming agreement by all and sundry in Enugu State that you should also pick your successor from Enugu East Senatorial District. We therefore wrote Your Excellency in November 2021 amplifying and aligning ourselves with the popular mandate of our people on this issue."

“It is on this highly ennobling premise that the gamut of Ohanaeze Ndigbo Enugu State Chapter including our grand patrons, patrons, 17 Local Government chapters, women and youth wings hereby express our unequivocal solidarity with Your Excellency (Ugwuanyi) and restate our unalloyed loyalty and support to our Father, Mentor, Leader and Provider.”

Prof. Eze expressed immense gratitude to Gov. Ugwuanyi for his “generous support of the activities of Ohanaeze Ndigbo, Enugu State Chapter all these years,” and beseeched God to continue to bless and reward him abundantly.