*Sympathizes with victims of protests

*Condemns acts of violence and criminality in the state

Governor Ifeanyi Ugwuanyi of Enugu State, on Thursday, addressed the people of the state over the unfortunate hijack of the peaceful #EndSARS protests by miscreants, leading to acts of violence, criminality and destruction of public and private property. 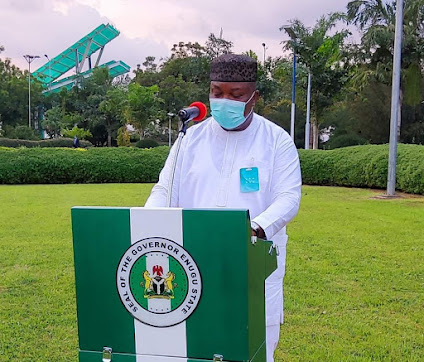 Gov. Ugwuanyi who condemned the acts of violence and criminality perpetrated by hoodlums, sympathized with victims of the violent protests.

The governor therefore appealed “most passionately to youths of Enugu involved in the mayhem to have a rethink, pull back and allow measures instituted to address our collective pains to play out”.

He disclosed that his administration has inaugurated the Judicial Panel of Inquiry to investigate complaints of police brutality and/or related extra judicial killings in the state, reiterating that the 24-hour curfew imposed in Enugu East, Enugu North and Enugu South Local Government Areas of the state is still in place.

Appealing further to the protesting youth the governor said: “Let us take back our hitherto peaceful Coal City from hijackers of the peaceful protesters and perpetrators of violence and criminality who do not represent our collective wishes”.

Calling on parents and guardians to restrain their wards from engaging in any unlawful conduct as well as the traditional rulers, religious leaders and stakeholders to help in calming frayed nerves, Gov. Ugwuanyi maintained that “Enugu is our common heritage, our home and we deserve to live, work and rejoice in it”.