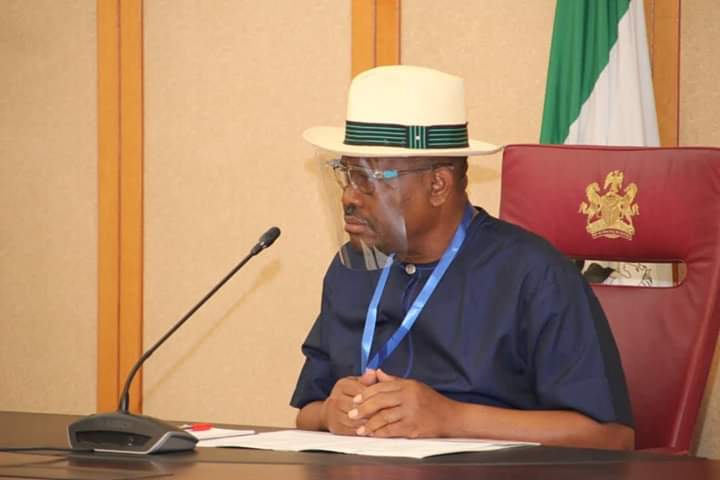 Rivers State Governor, Nyesom Ezenwo Wike, has expressed delight over the decision by three international oil companies to collaborate in establishing a COVID-19

Treatment Centre in Bonny Local Government Area of the state.

The decision for the upgrade and equipment of the Bonny General Hospital as a Treatment Centre was taken today at a meeting called at the instance of Governor Wike at Government House, Port Harcourt.

The expected Treatment Centre is expected to be prepared and equipped within the next four weeks.

Governor Wike said that the meeting was called to address the situation in Bonny where some tests conducted so far and with briefs from the State Ministry of Health paints the picture of the area becoming an epicentre of the pandemic.

The Governor stated that the highest number of people testing positive are oil workers which accounts for 60 percent of cases recorded so far.

He said that the situation has vindicated his position on the need for oil companies to cooperate with the State Government to fully implement the COVID-19 preventive protocol.

"Nobody is against anybody carrying out oil exploration activities. All I have always argued is that if you are bringing people from outside the state which is like an interstate movement, there is need for us to know so that we are able also to take precaution and make sure that they follow the protocol put in place by the Nigeria Centre for Disease Control (NCDC)."

"Nobody will want to to stop oil exploration because that is the mainstay of the economy of this country. But people have to be alive before you can use the revenue. If you make the money from the oil sector and human beings are not there what will be the essence of making the whole money. Money is to be used to advance economic life but man's well-being is more important."

"So we felt that there is need for us to work together so that we will be able to reduce this pandemic in the state."

The Governor also urged the oil companies to provide basic hygiene items like hand sanitisers and water at strategic places in Bonny communities.

On the issue of denial pervading the community, the governor promised to engage the traditional institution and community development committees to enlighten their people on the reality of the pandemic.

Governor Wike said that government might consider a possible lockdown of Bonny after due consultation with the Amanyanabo of Bonny.

On the Bonny-Bodo road project, Governor Wike frowned at the lack of interest shown by the Federal Government in releasing its counterpart funding when NLNG are fulfilling their own part of the agreement.

He said that such treatment of issues concerning the Niger Delta that sustains the country financially is unacceptable.

The Managing Director of Nigeria LNG Ltd, Tony Attah, appreciated the bold measures taken by the governor in dealing with the pandemic and pledged the company's continued support.

The Deputy Managing Director of SPDC, Simon Roddy, pledged that his company would support all measures taken by the government to keep the state safe.

In his own remarks, the Executive Director of Exonn Mobil Producing Nigeria Unlimited, Udobong Ntia, also said that they are fully committed to preventing the spread of COVID-19 in the state.

The Commissioner for Health, Professor Princewill Chike, said that some results of samples collected in Bonny show presence of COVID-19 and that the lack of treatment and testing centres posed a serious threat.